Posted at 09:45h in Reviews, Toys and gadgets by cforc 0 Comments
0 Likes
Share

Code Monkey Island is a family-friendly board game that introduces kids ages 8 and up to programming concepts used by real programmers. It takes about a minute to learn the rules and 45 minutes to play, and exposes kids to fundamental programming concepts like control structures, data structures, Boolean logic and operators, and assignment and mathematical operations. It teaches kids how to use and master the fundamentals of computer science, and is played in thousands of homes, schools, libraries, and after school camps around the world.

The idea is that you have a group of monkeys you need to get to the banana grove. Other groups are trying to get there as well and you each get cards you can play that have different effects on all the monkeys on the board. As the wise leader of your own tribe of monkeys, it’s up to you to guide all three of your monkeys safely around the board and into the banana grove. After its successful Kickstarter campaign, Code Monkey Island is being used in thousands of homes and classrooms around the world, helping children and adults alike discover the magic and fun of coding.

Step 1: Each player chooses their favorite tribe of monkeys, and sets them down in the corresponding Start Circle.
Step 2: Everyone is dealt 3 Rule cards.
Step 3: On their turn, a player draws 1 Rule card, and plays another card from their hand to move their monkeys forward.
Step 4: The first player to get all 3 of their monkeys around the island and into the banana grove wins!

There are 12 plastic monkey figurines in total: 3 red, 3 blue, 3 green, and 3 yellow. Each player becomes the wise leader of their own tribe of monkeys, and it’s their job to guide them safely around the island. Players use Rule cards to move their monkeys forward based on the position of the other monkeys on the board. There are two basic types of Rule cards: Check and Count. 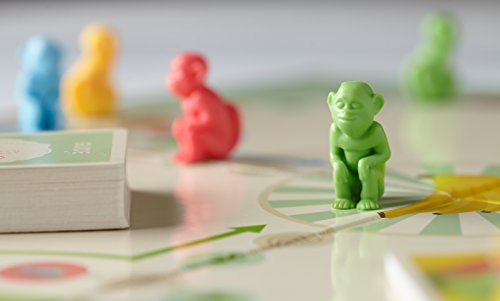 Code Monkey Island doesn’t teach kids how to write programs – rather, it helps them master the logic constructs that are used in virtually every program that’s ever been written. Familiarizing kids with these concepts at such a young age will be hugely helpful as they go on to learn real programming languages in school.

The normal price of the boardgame is around 30 USD.